Example of Beat Sheet for a Pitch/Leave Behind

Read the parent article about treatments and beat sheets on Genre Hacks: Writing The Feature Script: Week Three - The Treatment

Working in a remote village in are three American volunteers.

Marcy – (20) Ivy League, workaholic, and over-achiever, she is culturally sensitive and well-mannered. She has been a good girl all her life. Secretly dreams of acting out, getting a tattoo or a piercing, and being rebellious. Because of her flexibility and nimble toes, her best friend has nick-named her “Monkey Foot.”

David – (22) Marcy’s best friend, and although he is handsome and extremely funny, he’s a bit of a nebbish. Because of a scraggly beard, and “jew fro” grown out from months in the rain forest, Marcy has nicknamed him “Yeti.” Spending a year volunteering in the rainforest before going to med school, both he and Marcy have grown very close to the poor villagers to whom they provide medical care.

Sarah (20) – A Christian missionary from , she has platinum blonde hair, blue eyes and the face of an angel. She was home-schooled in her church, and has made a vow of chastity. She feels her body is a sacred, gift from God, and would not let it be blemished in any way. She doesn’t drink, smoke or swear and sees abstinence and self-control as her greatest strength. Marcy and David call her, Virgin Mary, behind her back.

After their last day in the village, they go to a bigger city and meet up with two American Friends.

Lane (23) – David’s friend from high school. Outwardly he has a rock-star persona and is covered in tattoos and piercings. One the inside he’s a nerd (like David) who collects body art the way he used to collect merit badges as an eagle scout. He’s coming to to get an exotic “tribal” tattoo.

Yvonne (18) – Lane’s girlfriend. Outwardly she’s a brash, bitchy party-girl, with nose ring and a “tramp stamp.” On the inside, she is deeply critical and insecure about her body. Although any objective person would call her pretty, she sees nothing but flaws in the mirror: her legs too short, breasts too small, nose too big, and on and on…

The Artist – The villain. He has created a cult of personality around old Brazilian tribal rituals, changing the practices into something dark and perverse. His acolytes follow him like a messiah. He is the Charles Manson, of body modification.

Marcy wakes up as if from a nightmare, disoriented, sickly hung-over and unsure of where she is. To her dismay, she see’s David is the bed too. She goes to the bathroom to throw up. Feeling pain in the small of her back, she looks in the mirror and discovers the tattoo that she impulsively got the night before. David sheepishly appears at the doorway, “I got one too.”

Two Days Earlier. Marcy, David and Sarah say goodbye to the villagers with whom they have spent the last eight months. They join in hunting rituals with the children.

In the city, they decide to celebrate their last day in . They meet up with David’s high school friend Lane and his girlfriend Yvonne. An odd mix of personalities.

Marcy and Yvonne – Get a spa treatment. In order to wear a bikini, Marcy gets waxed. After eight months in the wilderness there is a lot to wax.

Lane and David – David get’s cut and shaved. While working out, Lane reveals that he has come for a infamous body artist and a coveted tattoo.

Beach – David and Marcy see each other all cleaned up and in skimpy bathing suits, and they realize to their mortification that they are attracted to each other. Yvonne goes topless and buys drugs, while Sarah is prim and natural in a granny-one piece.

The Wild Night – The all “cut loose” after years and years of discipline. They all get wildly drunk. They meet up with The Artist and some of his followers who seem charismatic and uninhibited. The behave badly, shedding their cultural sensitivities and acting like drunken, ugly Americans. The world is their .

Even Sarah is mesmerized by The Artist’s hypnotic voice. Fueled by rebellion and alcohol, they all, even Sarah, decide to get the special tattoo to commemorate the night. They travel far from the city in a crazed road trip and crash their car. After getting their tattoos, years of sexual tension explode and Marcy and David finally sleep together.

The Next Morning  - They wake up, mortified and regretful, and discover that Sarah is missing. She went off with The Artist and his acolytes.

Sarah wakes up on the modification table.

Her friends search for her and are led deeper and deeper into the jungle by people who recognize the tattoo. We CROSS CUT….

Marcy and the others use clues to reconstruct what happened the night before, retrace their steps, and look for Sarah.

Aftermath: Sarah wakes up to find her eyes dyed red and her teeth sharpened to points. She is strapped to the table and they begin the outlines of full body are tattooed on her naked body.

Marcy and the others go deeper and deeper into the wilderness. They are robbed and beaten by a group of thieves.

Aftermath: Sarah wakes up to find every square inch of her body covered in tattoos and skin dye. She is strapped to the table and gets her first percing.

Marcy and the others are without money, cellphones or passports. A group of creepy old men recognize the tattoos, and agree to lead them to The Artist.

Aftermath: Sarah wakes up to find balls have been implanted under her skin.

Marcy and the others arrive at The Artist’s compound just in time to see the “finished” Sarah appear in a mysterious tribal ritual, in which her throat is cut. 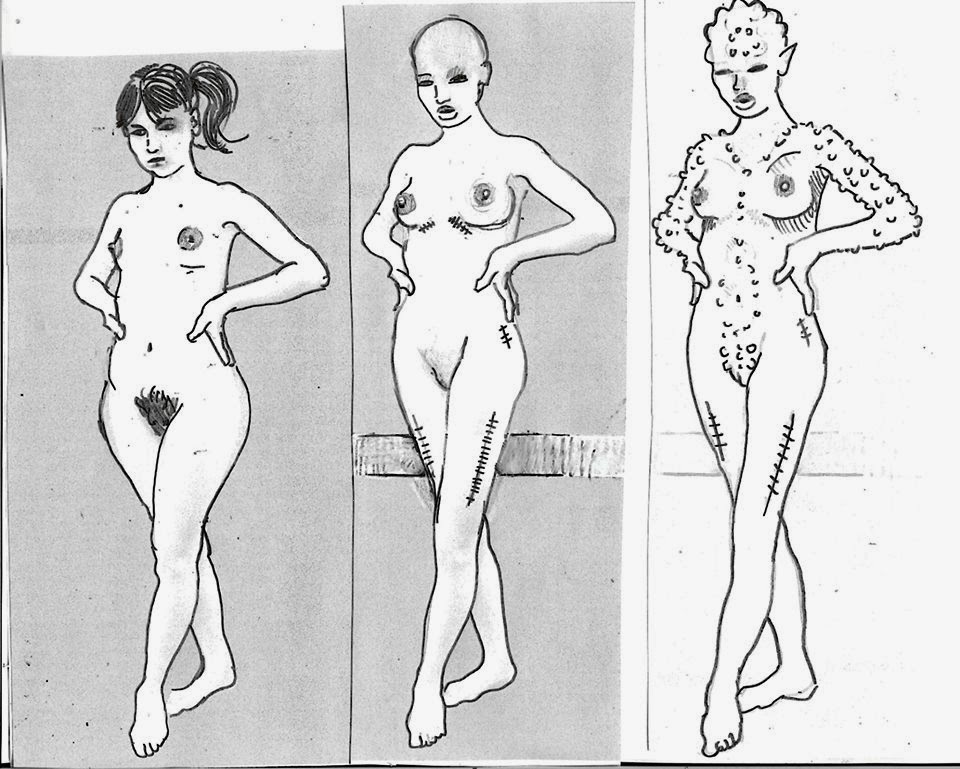 Marcy and David wake up on the modification tables. Like Sarah they are examined and shaved bare. The Artist says that he is going to save Marcy for something special.

The room is a 19th century surgical theater, with the acolytes and the helpless heroes, watching as The Artist performs various forms of modifications.

Although wide awake while on the table, the victims are sedated while in their cells. They are continually waking up to discover the semi-healed aftermath of the previous modification: pointed ears, ribbed flesh, skin punctured with metal hoops. 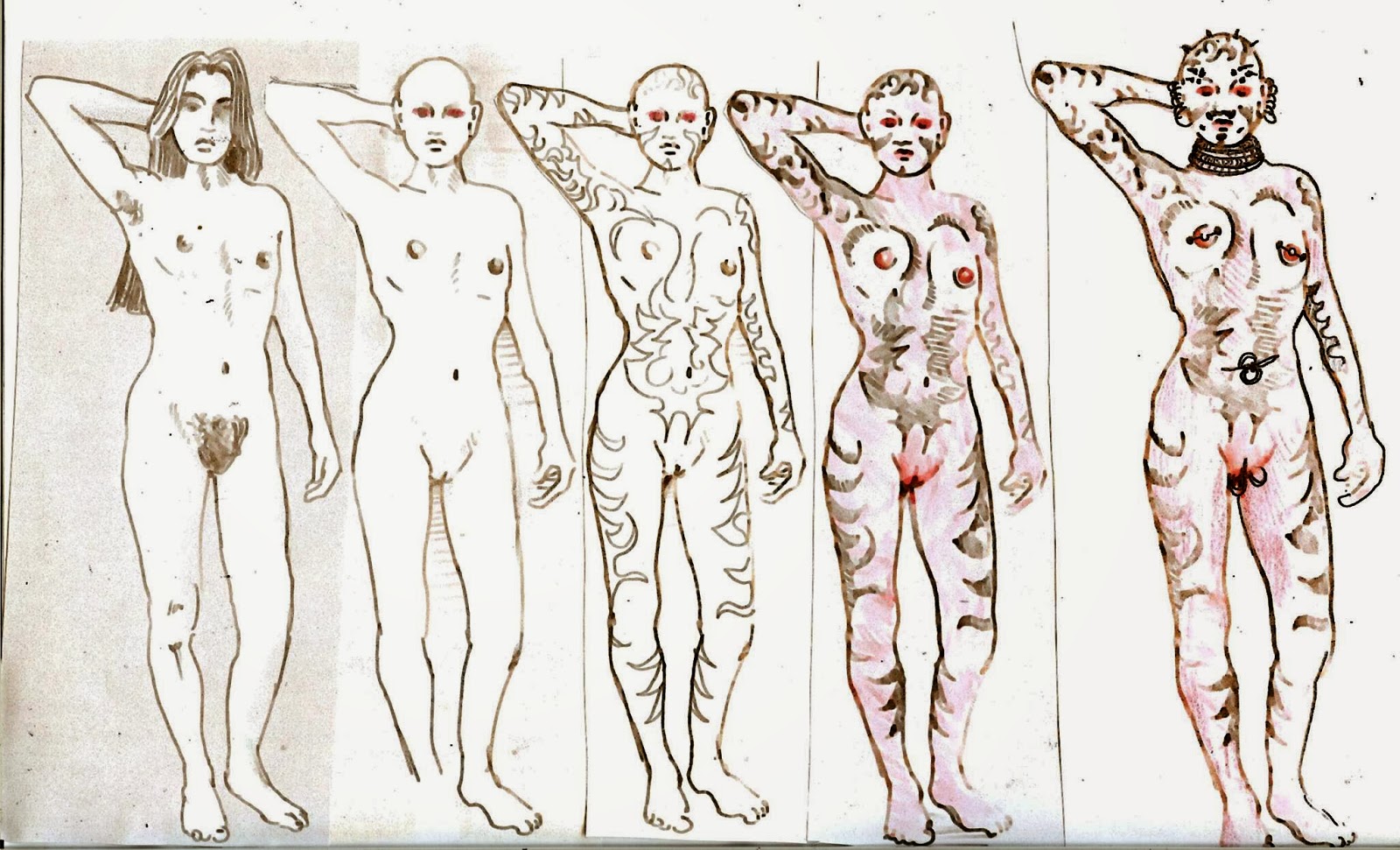 But this time around we experience with them being shaved, having genitalia pierced, having flesh cut open and sewn back together to create new forms. 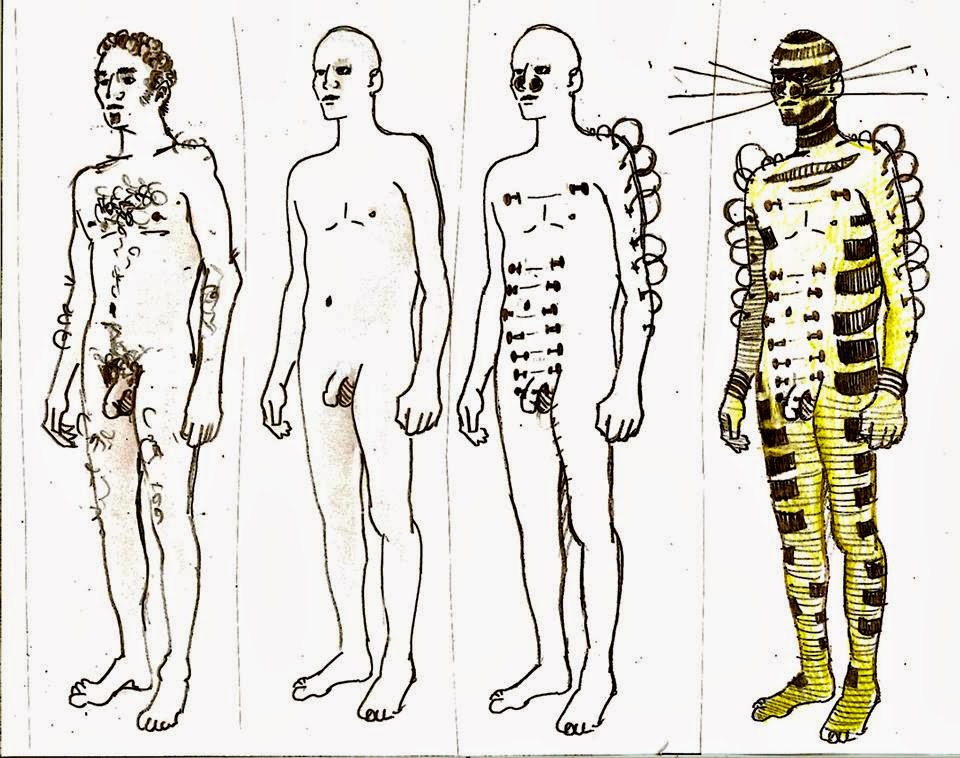 None the less, Lane tries to break out, but is too drugged to find his way out. He discovers that Sarah’s body is being EATEN, in a perversion of tribal cannibalism.

They are all being “prepared” for a ritual sacrifice and consumption. He is the Charles Manson of body modification and has created a kind of cult inspired by tribal practices thousands of years earlier.

Lane is finished and consumed.

The Artist puts it all in perspective, “You Americans see the rest of the world and its people as products to exploit and consume for your pleasure. Well, now WE consume YOU.”

In a sick irony, Yvonne’s body is modified in just the way she might have wanted: longer legs, larger breasts. But then hundreds of discs are inserted under her flesh to give her the lumpy hide of a reptile. When the insertions get swollen and infected, The Artist reacts like a child disappointed with a crayon drawing.

“It’s all wrong! She’s ruined!” In front of the others, The Artist slashes Yvonne to death on the modification table like Picasso attacking a failed painting.

Marcy tries to escape and fails. In the process she discovers what is in store for her in the long run, because she is special. She sees The Artist’s attempts at experimental plastic surgery. Men with cloven hooves. A girl with a fleshy tail. A woman with leathery wings.

All these modifications were grotesque failures. 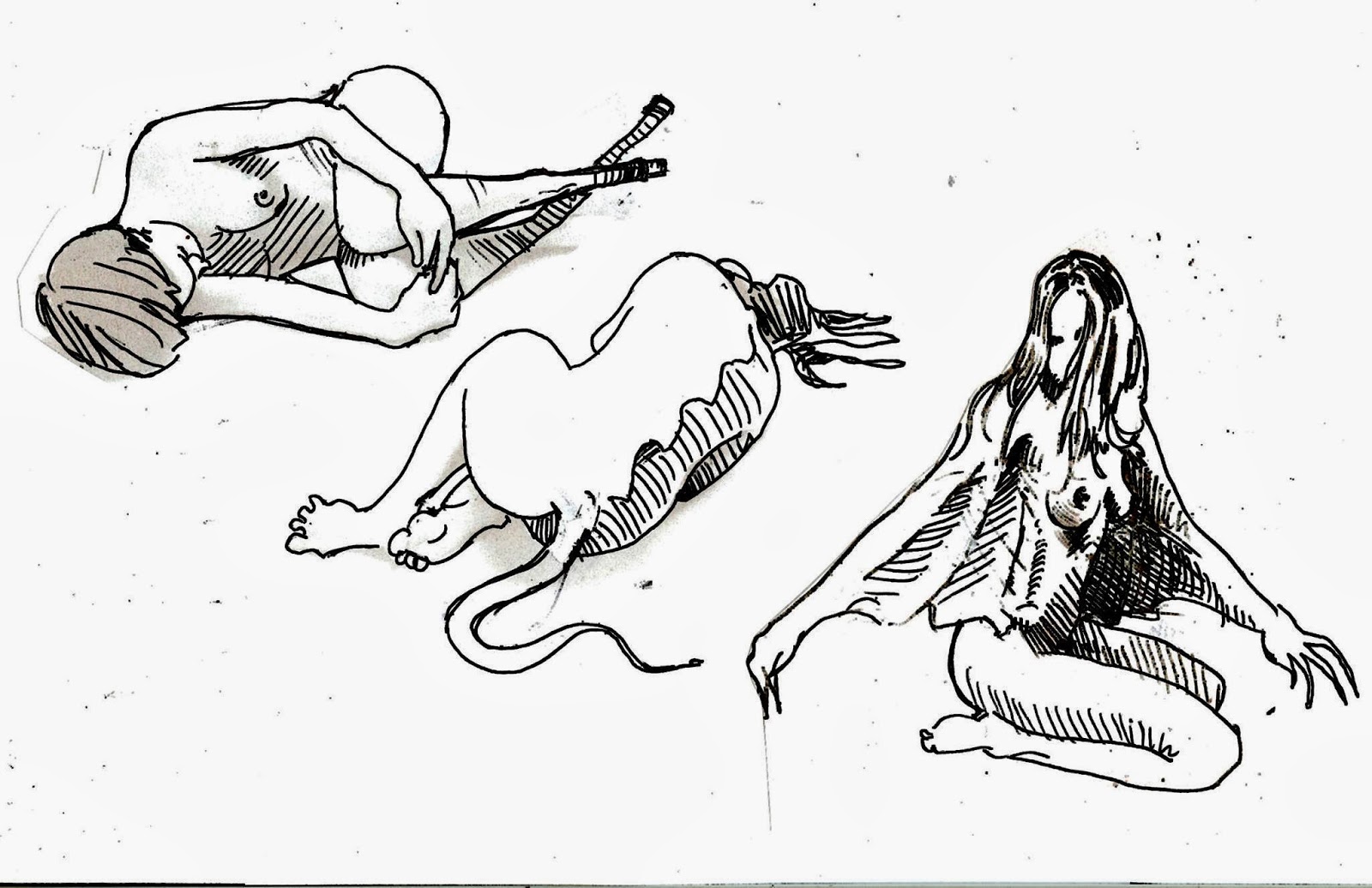 Marcy and David are able to whisper through the walls and make a final escape plan. David is “finished” and ready for consumption.

While being prepared for an operation to remove her breasts and start work on her “wings,” Marcy grabs a scalpel with her foot (Monkey Foot) and slashes the attendant’s throat. She and David are able to escape into the jungle.

In the chase through the jungle, Marcy and David use skills they learned from the indigenous tribes to elude and ultimately kill their pursuers.

A group of village children, like the ones they cared for and played with in the opening scenes, find them and help them back to civilization.

Months later, the wounds are healing, and Marcy and David are together.

Read the parent article about treatments and beat sheets on Genre Hacks: Writing The Feature Script: Week Three - The Treatment

I write this blog in order to connect with intelligent, ambitious, and creative people. If you leave a comment, you will inspire me to write more. If you liked the article, please share it.